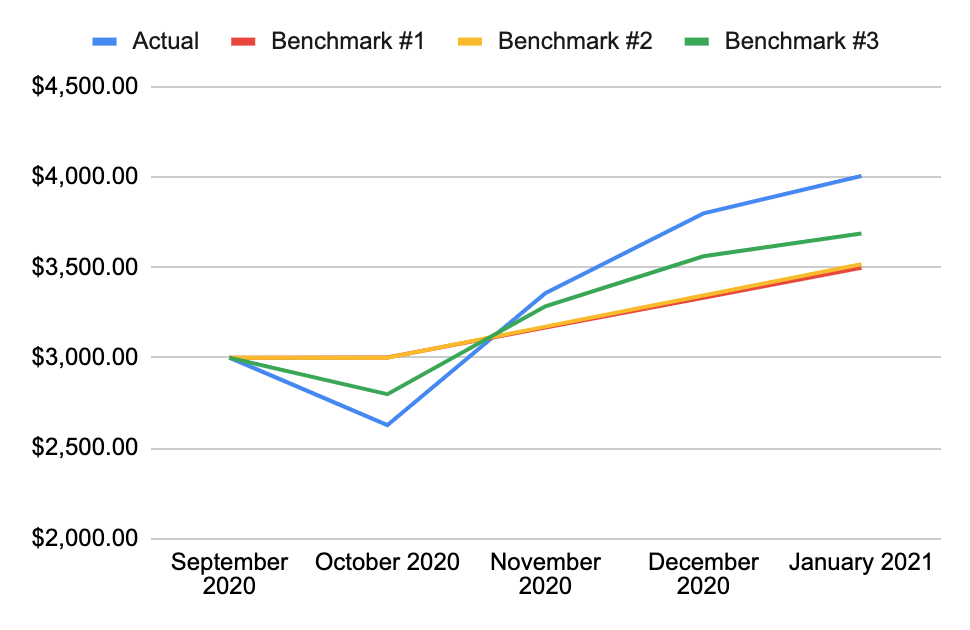 Recapping from last month, I had put a total of $220 towards my mortgage principal from options trading profits, saving a total of $338 in interest over the life of the loan. I started to diversify away from putting all my profits straight into my mortgage by beginning to split it three ways: mortgage principal, preferred stock, and Hedgefundie’s Excellent Adventure. With everything included, my $3,328.42 invested in this strategy had returned $470.38 (14.1% ROI/69.7% CAGR!). Surely those returns aren’t sustainable, right?!

For the most part I have continued the same strategies from the past few months. I did add a couple synthetic covered calls (aka “poor man’s covered call” or “PMCC”). I will share those positions and strategy below.

Last month I mentioned I may continue to sell at the $15.50 strike even if it stays in the money. I opted to roll up to the $16 instead. American Airlines continues to have some very high implied volatility and I think some longterm upside. In the short term I’m really limiting my monthly returns by continuing to roll up, but I think it will pay off over the next few months in terms of total return.

As a sneak peak to February’s update, I’ve actually already rolled up to $17. This time with a very respectable credit due to the reddit frenzy over stocks like $AAL. I also sold another put credit spread at the $14.5/$13.5 strikes.

$APHA, no open stock positions. I continued selling cash-secured puts on Aphria this month for some modest profits. I closed two trades for a combined $23 profit from a maximum collateral of $700, which is a 3.2% return.

In recent days $APHA has really taken off. If I choose to sell more puts I will most likely switch to credit spreads to limit my downside and give me more flexibility with rolling positions down and out when challenged. Currently I have a $13/$12 put credit spread for the February 26th expiration.

$CLSD, no open positions. I sold one cash-secured put on Clearside Biomedical at $2.50 for a credit of $41. I came across this one after reading this “breakout” post over on Seeking Alpha. The article was compelling enough for me to make a speculative trade on it. It worked out, and I closed the trade with a $21 profit a few days later, leaving me with an 8.4% return.

So the obvious benefit is you are putting up (and risking) less capital. There are two main drawbacks to using this method vs. using typical covered calls to consider. The first is that this is a leveraged position. So when $GE goes up by 5%, the price of my LEAP goes up by ~8%, and when it goes down by 5%, I’m losing ~8%. So this drawback actually goes both ways. The other major drawback is my collateral now has an expiration date! This means that if $GE closes below $5 next January, I lose all of my principal. However, I know I will be selling lots of premium before then and feel confident that I will have plenty of opportunities to get out for a profit or sell for a more manageable loss before then.

I am currently selling $12 strike covered calls and look forward to showing those results in the next month.

$GPRO, no open stock positions. In January I had some good results with selling put credit spreads on Go Pro. I closed a total of two trades for a total profit of $39. The largest spread I had for the month was $200, so that’s a 19.5% return. It’s really tough to beat the ROI of credit spreads.

I adjusted one contract by moving the long Put leg down from $7 to $6 strike when the price started challenging the $8 strike. I had decided that I would be OK with taking assignment at $8 if it came to it, so I was willing to increase the spread to $2, increasing my max loss for the trade but not effecting the likelihood of the position getting assigned. In the end the stock moved up dramatically about a week later so I decided to close it when there wasn’t much extrinsic value remaining. I then opened a similar position that same day with an expiration of one week later for a high probability “easy” profit.

$M, no open stock positions. Macy’s is now trading in the mid teens. Crazy that I was selling covered calls in the $6 range when I started. Here is an example of where I could have made a lot more money just buying and holding. But who knew the stock would nearly triple in a few months? For this month I closed 3 positions for a total profit of $32. I ended the month with another credit spread with a potential profit of $20.

$MAC, no open positions. I just had one trade on $MAC for the month for an $8 profit (5.3% return). I found $MAC on a Seeking Alpha comment. Liquidity wasn’t great so I decided to not continue trading it. It looks like it was caught up in some $GME short-squeeze mania at the end of the month that I wasn’t aware of until looking at the chart just now. It has more that 50% short interest, so it was an easy target for the short-squeeze crowd.

$MRO, 1 LEAP January 21, 2022 $5 Strike at a cost of $3.80. As I wrote above regarding $GE, I am going long with a LEAP contract on Marathon Oil Corporation. I think as things begin to open up we will see an increased demand in oil, raising oil price and profits for many of the oil corporations. I closed two trades earlier in the month for a profit of $31. At the end of the month I had a covered call at the $9 strike with a credit of $34, a 9% potential return.

As I explained in last month’s post, I am no longer putting all profits (less taxes) into the mortgage principal. I think I can do better with other fairly passive, and more risky, investing. Those profits, which will beat the 3.125% return that I get by paying down my mortgage, will then go towards the mortgage. My new minimum goal for the mortgage is 1% of the beginning portfolio value each month. January began with a value of $3,498, so I rounded it up to $35. With a combined $255 put towards my mortgage principal in three months, I will save $392 in interest over the life of the loan.

My first passive alternative to directly paying off my mortgage principal is preferred stock. At the end of January, my preferred stock portfolio for this mortgage pay off strategy was worth $116.97 and consisted of five different positions. I purchased three preferred stocks for the month, totaling $69.27. I do plan to write a bit more about my strategy with these, but for now, here are my current holdings (1 share of each):

I haven’t received any dividends on these positions yet, but they will go toward the mortgage when they come in. I hope to buy at least one new preferred stock each month.

This strategy is purely for capital growth. The target allocation is 55% UPRO/45% TMF, which are both 3x leveraged ETFs. Once their value is enough to reduce my mortgage term by one month, I will put it all towards the mortgage and start over. I have yet to rebalance this because the total value is still so small, but rebalancing is critical to this strategy’s success. For January, $13 was put into $UPRO and $12 into TMF. At the end of the month, the value in these funds was $60.51. To reduce my mortgage by one month I would need to make a $610 payment, so still a long way to grow.

Of the $188 earned from options trading in January, $58 was set aside into the ULP for taxes, $35 was put towards the mortgage principal, $69.27 was invested into preferred stocks and $25 was invested into Hedgefundie’s Excellent Adventure. The remaining $.73 will stay in my trading account. The trading account’s value ended January at $3,515.08, preferred stock was at $116.97 (with a forward yield of 7.4%) and Hedgefundie was at $60.51.

In my introduction post I identified three different benchmarks I will be comparing my performance to. Benchmark #1 is putting all of my savings from my refinance, plus a 1 month skipped mortgage payment, into a savings account. When I wrote that post I was actually getting 0.6% APY, but it has reduced twice down to 0.3%. Benchmark #2 is putting all of those savings straight into extra monthly payments to the mortgage principal. Finally, Benchmark #3 is simply buying $SPY.

Obviously I am very pleased with the results so far and can only hope things continue to grow at a similar rate. What’s especially cool about all of this is that it all came from refinancing my home loan. The 3.125% rate I ended up with is pretty mediocre relative to what the averages are at right now, but because it allowed us to skip 1 month of mortgage payments and allows us to save $164.21, and because I am aggressively investing it rather than sticking it in a “high yield” savings account or, worse, spending it, I am slowly turning that opportunity into wealth.

Disclaimer: I am long $AAL, $MRO, $GE, $CDR-C, $NRZ-A, $NRZ-B, $PMT-B, $SCE-J, $SPY, $UPRO and $TMF. I am not a financial advisor. This is not investment advice. Please do your own research before investing in anything discussed herein.

2 thoughts on “Using Options to Pay Off My Mortgage Early: Month 4”

This site uses Akismet to reduce spam. Learn how your comment data is processed.

The Millionaire Next Door